What are the advantages of daycare?

Many parents like daycare centers because they offer a formal, structured environment. Many daycare centers are inspected for licensing purposes, in some cases caregivers are supervised (many classrooms have more than one teacher), and a director oversees the entire operation.

“I didn’t feel comfortable with the idea of hiring a nanny. I feel like I’d always want to check up,” says Noelle Haland, a copy editor in Minneapolis, Minnesota, whose 13-month-old son Max is in daycare. “I know taking care of a child can be frustrating and a nanny can also find it stressful.” Rather than worry about how a nanny might handle her son during particularly trying moments, Haland decided on daycare. 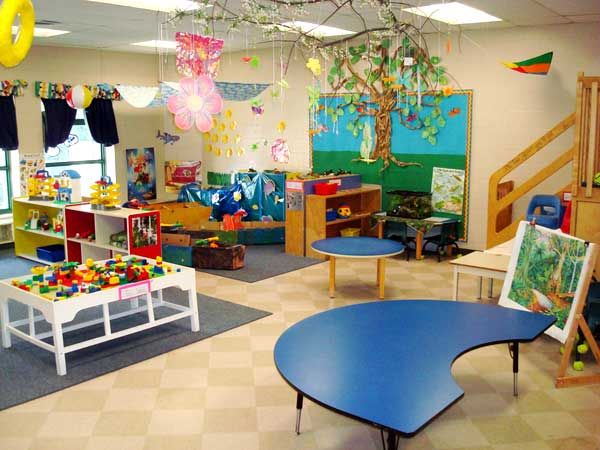 Another plus: Centers have clearcut rules for parents to follow (such as pickup and drop-off times) so you know exactly what is expected of you. A daycare center is usually more affordable than a nanny. Plus, parents have the opportunity to meet other parents who may be able to lend support and babysitting time. Also, the arrangement is more stable (compared to, say, nanny or relative care) because the center agrees to watch over your child regardless whether a teacher is sick or tardy or even tired of working for you. Yvonne Matlosz, BabyCenter mom, agrees. “We chose a daycare center so we didn’t have to work around someone else’s sick days and vacation,” she says.

Staff members at good centers are usually trained in early childhood education so they know what to expect from your child developmentally and are able to nurture his growing skills accordingly. If the center you’re considering doesn’t hire knowledgeable staff, keep looking.

Good daycare centers include a nice mix of activities during the day to teach different skills, such as singing, dancing, and storytelling. Scott Huber, whose 3-year-old daughter Lindsay has attended daycare in Portland, Oregon, since she was 2 months old, says he likes the fact that his daughter spends her day doing projects and honing skills in a structured setting.

“They’re not just playing all day,” he says, “they’re learning new things.” Huber says he feels especially good about his decision to put Lindsay in a center when he sees the projects she does. “Many of the instructional projects are a good mix of left- and right-brain activities, usually made of simple objects like blocks or beans or vinyl letters for creativity, but presented in an organized, structured, and methodical way,” he says. Ongoing research by the National Institute of Child Health and Human Development suggests that children in quality daycare centers may even have an intellectual edge over those in other kinds of care. When researchers compared kids in quality daycare to those in other, equally high-quality childcare situations, children in centers performed a little better on tests.Finally, toddlers can benefit from the chance to socialize with other children, which they may not get to do as often or at all when a nanny or a relative cares for them at home.

What are its disadvantages?

One problem with daycare is that you’re at the center’s mercy. You may have to pay a costly fee for late pickups, scramble for backup care when the center is closed on holidays, and stay at home when your child is sick. And your child is more likely to catch diseases such as colds and pinkeye, since he’s exposed to more germs. “My son Max never really had a serious illness before starting daycare,” says Noelle Haland. Children are also less likely to get the one-on-one care that you take for granted with a stay-at-home mom or nanny. Babies, in particular, need a lot of love and attention to thrive and do well. Finally, moms and dads know that handling one baby, let alone three or more, is tough work, which is why some parents balk at the idea of a single teacher caring for more than one baby at a daycare center all day long.

It’s true that quality of care dips when a person has to watch over too many children, but good centers make an effort to keep the teacher-child ratio as low as possible. Also, having a number of teachers at these centers means they can support each other when needed.

Quality daycare centers keep the number of children in each group low, too. “It’s easier to give one-on-one attention and be responsive when there are fewer kids in a room,” says Stephanie Glowacki, director of accreditation programs at the National Association for the Education of Young Children, a benchmark of quality.

A daycare center doesn’t have to follow these ratios unless it wants to receive NAEYC accreditation. But centers do have to at least meet state guidelines, which vary. Even so, you can use these ratios as a guide when you’re evaluating centers; the closer they are to NAEYC standards, the better.