Kids love magic. It’s a key ingredient of childhood. Every day is a new adventure of discovery, mystery, and wonderment. It starts when they’re babies playing peekaboo (“Mommy’s gone! Oh, here she is!”) and continues through their forays into imaginary worlds, where they can sling webs like Spider-Man or slay the dragon that lives in the closet. I recently caught my 3-year-old niece, Nula, sipping tea with an invisible fairy named Ubba Gobbler. According to Nula, her fairy friend had given her the magical power to disappear. Nula told me that all I had to do was close my eyes real tight, say the magic words “Ping Pong Pooey,” and poof! She would vanish instantly. And she did. (Luckily, I found her hiding under the coffee table.)

Performing magic tricks is a great way to join your own child in her world of wonder. Plus, your guaranteed status as the Cool Mom or Dad won’t be a bad perk either. I know this from firsthand experience. I’m a professional magician and have performed for kids for more than 14 years. Click to the next page and I will share a few starter tricks with you that are guaranteed to amuse and delight your kids faster than you can say “Abracadabra!” 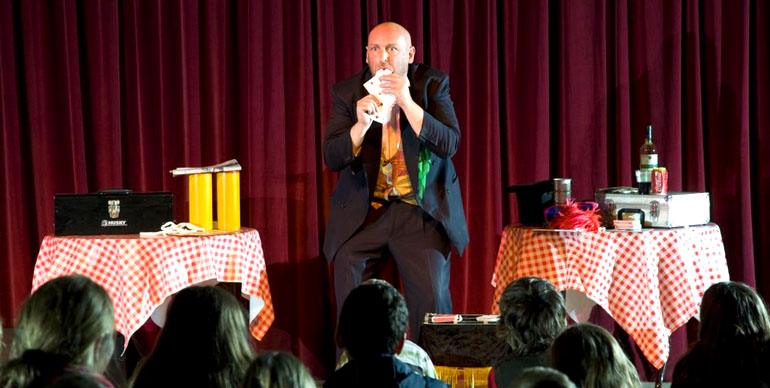 Young kids are amused by silly gags like the “I got your nose” game. Kick up the fun a notch with this thumb-splitting trick.

If your kid is older or not as easily impressed, you’ll have to create a more in-depth illusion to get her psyched. Try this “Guardian Angel Trick.”

I perform a variation of the coin-from-ear trick at the dinner table called “Presto, Veggio!”

The Force Is With You

My nephews, ages 4 and 5, are really into Star Wars, so I combined a little myth of Jedi visitation and some magic to blow their minds with this “Jedi Mind Trick.”